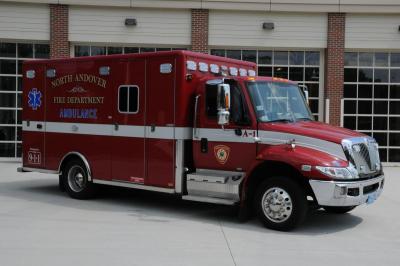 The North Andover Fire Department is the designated Emergency Ambulance Service Provider for the Town of North Andover, responding to 4,849 fire rescue & emergency medical calls in 2018, with three state certified class 1 (transporting) ambulances, one stationed at each of the two fire stations and one reserve – Central Station at 795 Chickering Road, and Station 2 at 9 Salem Street. Two Firefighter/Emergency Medical Technicians staff each of the ambulances.

Since 2015, all three Engines and the Ladder truck are certified class 5 (non-transporting) ambulances. This designation allows the Firefighters/EMTs on these trucks to begin care of a patient with all the same equipment as the transporting ambulances, until one arrives. Since 1983, it is a job requirement that new firefighters must attain and maintain their EMT certification. This certification is in Basic Life Support (BLS). Currently, of the fifty-six uniformed personnel on the Department: the Chief, Deputy Chief, 13 Lieutenants, and forty-three firefighters; all are EMTs.

Paramedic services are provided through the Lawrence General Hospital – Advanced Life Support Unit (ALS), which is dispatched according to protocol.

EMTs are trained in the use of EPI-pens for the treatment of anaphylactic shock, such as in reactions to food or insect bites; Albuterol nebulizer treatments for respiratory illnesses; glucometry to aid in treating diabetic emergencies; and Narcan for treating opiate overdoses.

Medical control is provided by the Lawrence General Hospital and EMTs can utilize this resource in the treatment and care of the patient.

The department has a working relationship with Boston Med-Flight. The helicopter or ambulance transport can respond in minutes. Fire department personnel can establish a safe landing zone proximate to the site of the injured and, once safely loaded the helicopter, can have those severely injured persons at medical facilities in Boston.

In terms of self-help training, the department has American Heart certified CPR instructors.

Ambulance Cost – Since the mid-1980’s the fire department has charged for ambulance service. Our primary service is emergency patients of trauma or medical illness.

The Board of Selectmen, at their regularly scheduled meeting, sets the current rates annually in January. Persons who do not have the means to pay and/or fall below the Federal Hill-Burton poverty guidelines can request abatement through the Ambulance Abatement Committee. The committee is comprised of the Fire Chief, Town Finance Director and the Assistant Town Manager. Those persons interested in applying can request the forms from the Administrative Assistant to the Fire Chief  at 978-688-9590, or in person during office hours at the Central Fire Station – 795 Chickering Road.